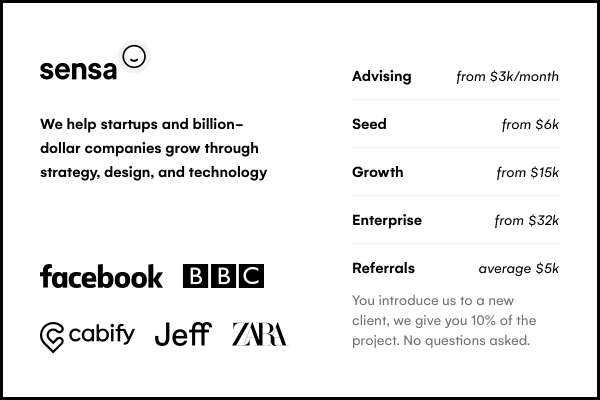 Sensa is the design studio that built both this newsletter and Dealflow.es a couple of years ago.

When I made the decision of building a new brand and product for this newsletter, I talked to various design agencies in order to choose the one that I felt could do a better job. I ended up going with Sensa because of their past history working with both startups and large companies such as Facebook, the BBC or Forbes, and most importantly, because of my previous friendship with Manu Gamero, one of Sensa’s co-founders. Human connections are important!

I’m glad that they’ve decided to sponsor this week’s newsletter because I really like the work that they do, and also because last week they announced a transparency exercise that I quite welcome in the agency space: they made their prices public.

Pricing was one of my main questions when I started thinking about Dealflow.es, and the only way to find out what was benchmark was to talk to a bunch of agencies.

From €3,000 per month or €6,000 per project, any company can make their product look like one of the best out there. And on top of that, they offer a 10% referral to anyone who introduces a client to Sensa.

I really welcome this move and I recommend Sensa.