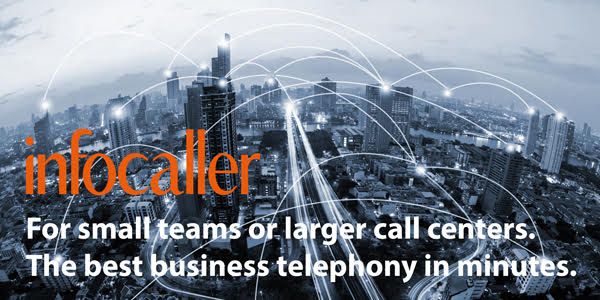 For small teams or larger call centers, Infocaller is the best cloud phone system for your business. Infocaller allows companies to virtualize their telephone customer service in minutes.

To make things easier, with Infocaller you can either bring your current telephone number or get a new number (local or toll free). Your customers will reach you in one place and your team can receive and make calls using the corporate number in their mobile, PC, tablet or SIP phone, anywhere in the world.

Don’t settle for giving up the privacy of your mobile or messaging apps. Get all the advanced functionality of a PBX: team-ring for your inbound calls, call recording, API for your apps, receive calls from Skype, and more.

Get a number and try Infocaller for free here and read more about the company on their website.